Society being misled about anti-rape laws 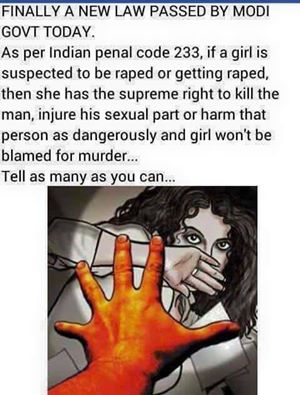 The Delhi gang-rape case has sparked a nationwide demand by the civil society for the need of strict anti-rape laws. With people keeping the debate alive by exploring the already existing laws for rape cases under the Indian Penal Code (IPC), many bits of legal information are going viral on the social media.
In the melee, a string of SMSes and social media posts carrying information about a new anti-rape law being passed, is misguiding people, claim legal professionals and senior members of the judiciary.
The message states, “A new law has been passed and under section 233 of the IPC, if a girl is suspected to be raped or getting raped, she has a right to kill the man, injure his sexual organ or harm the person. In such a situation, the girl would not be charged with murder.”
Debunking this rumour, senior criminal lawyer, C V Nagesh said, “The act of rape is punishable under the IPC section 376 and punishment starts from 10 years to life imprisonment. There is no bill in the parliament about any amendments to the laws relating to rape currently. However, in certain cases judges have increased life imprisonment and have ordered that the accused will live and die in jail.”
He added, “The existing laws in the country are good enough if the prosecution can establish that there was a case of rape. We just need an active and efficient investigation agency, a brilliant prosecution and a dispassionate judge to decide based on facts presented. Further, under the current judicial system and based on the various statutes of the IPC, judges have the power to order that the sentence cannot be reduced and there will be no commutation of imprisonment.”
Meanwhile, many people who were hit by this piece of false information have circulated the information. “I got this SMS and circulated it to all my female friends. It seemed like a major development and finally felt like the country’s leaders cared about the demands of the people,” said Kathiyani, a lecturer.
Arvind Narayan, Lawyer, Alternative Law Forum said, “Starting from registering an FIR, to ensuring investigations are carried out and a charge-sheet is filed — all the processes need to be looked at closely. A possible step to be taken could be the appointment of a senior counsel at all the High Courts to monitor the investigation. Further, although there is a Right to Private Defence law in the country, it applies only in case of a threat to life.”
Posted by Praveen Dilip Geoffrey at 12:52 PM