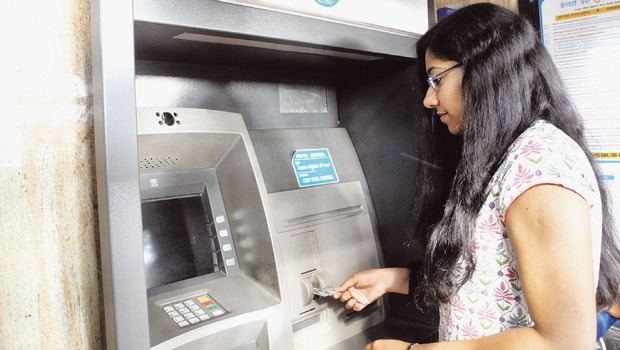 Come November 11, ATMs in the country will also dispense banknotes of Rs. 50 denomination. Currently, the lowest denomination note a customer can get at an ATM is Rs. 100.
The Reserve Bank of India said all ATMs and cash dispensing machines will have to be re-configured to disburse bank notes of Rs. 100 and Rs. 50 denominations prior to reactivation of the machines on 11th November, 2016.
This move is likely to resolve the perennial problem -- not getting lower denomination notes -- that customers faced so far at ATMs. Usually, ATMs dispense only higher denomination notes – Rs. 500 and Rs.1,000.
The RBI said banks, however, should await separate instructions from Reserve Bank of India on issuing Mahatma Gandhi (New) series Notes through ATMs and cash dispensing machines though they can be issued over the counters from November 9, 2016.
Prime Minister Narendra Modi, in a bid to clamp down on black money and fake currency notes, announced on Tuesday that Rs. 500 and Rs. 1,000 banknotes will no longer be legal tender with effect from today.
All ATMs, according to RBI, have been closed for operations so that they do not dispense the withdrawn old higher denomination banknotes (OHD). The ATMs may resume functioning from November 11, 2016 upon their recalibration to dispense bank notes of only Rs. 50 and Rs. 100 denominations.
Further, to ensure customer convenience, the RBI has advised banks to provide all cash withdrawal transactions at their ATMs free of cost to their customers till December 30, 2016. It has also been decided that banks may fix a limit of Rs. 2,000 per day per card withdrawal limit at ATMs, for all their customers, till November 18, 2016.
Posted by Praveen Dilip Geoffrey at 3:27 PM