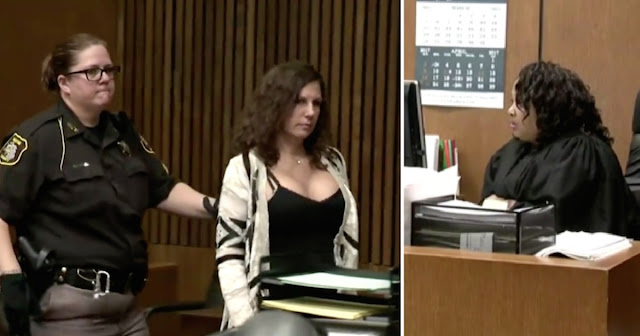 People have different ways of dealing with crises. Some people react with tears, some people panic, and others become so shaken that they react completely unexpectedly. Laughing, however, is not a reaction that judge Qiana Lillard finds acceptable in her courtroom.

When a woman and her relatives didn't understand the seriousness of being in court, judge Lillard let them know that their behavior was unacceptable. And now, people around the world are praising her after a clip of the event was shared on social media.

In June 2016, Amanda Kosal got behind the wheel after drinking alcohol. Her reckless driving led to a 31-year-old man named Jerome Zirker losing his life. And after the tragic event, Kosal was arrested and brought to court.

During the trial, neither Kosal nor her relatives seemed to understand the seriousness of the situation. Their laughter from the back of the courtroom caught the attention of judge Lillard, who asked what was so funny.

"How can you sit here at a tragic moment like this and laugh and smile when somebody has lost a family member?"

Kosal's mother and her boyfriend continued to smirk and laugh, either because they didn't understand the situation or because they thought she would get off lightly. But judge Lillard then said something that wiped the smiles right off their faces.

"I understand you all are upset because your loved one is going to prison, but guess what? She's going to prison for the choices that she made," judge Lillard said before sending Kosal's mother, Donna, to jail for 93 days for contempt of court.

"Your disruptive and disrespectful behavior disrupted today's proceedings and you, ma'am, are going to the Wayne County Jail for 93 days," judge Lillard said.

Judge Lillard felt empathy for the victim's relatives and proved that justice prevails. Please share if you think she did the right thing.
Posted by Praveen Dilip Geoffrey at 5:18 PM