Love is in the air for Irfan Pathan these days. Last week, the left-handed bowler was seen singing romantic songs dedicated to his wife Safa Baig. On Sunday, he uploaded a selfie for the first time with her from his official Facebook account with the caption, "This girl is trouble ?? #love #wifey"

It did prove trouble for Pathan as he was soon ridiculed for not only uploading picture of his wife, in which half of her face is visible, but also for wearing nail polish. The picture, in which Baig is covering her face, drew flak from fans on Facebook. Pathan is being ridiculed for 'letting her show her arms and part of face.'

The comments ranged from advising him to remove the picture to slamming him for not being 'a good Muslim'. A comment read, "WTF Tell her to cover her arms. Being a muslim and being a Pathan its your duty to do so." 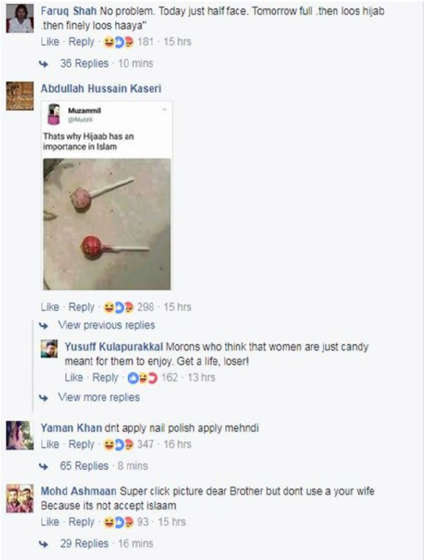 Pathan married Baig, a model from Jeddah in a low-key affair in February and the two were blessed with a baby boy in December.

The bowler has been out of the cricketing scene and last played for Gujarat Lions franchise in the Indian Premier League. He even scalped two wickets in his last match.
Posted by Praveen Dilip Geoffrey at 2:39 PM