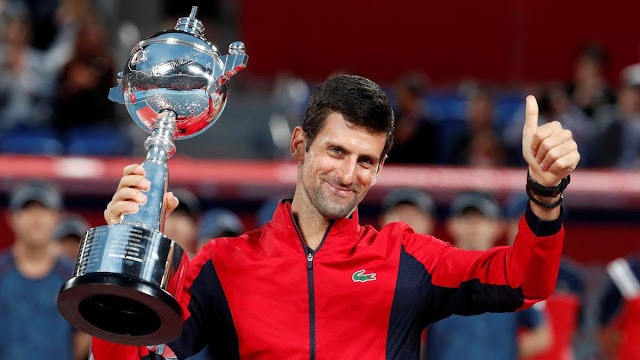 Twelve months after exiting the Australian Open with fitness, form and career doubts swirling, Novak Djokovic on Sunday struggled to keep his emotions from reducing him to tears.

The Serb world number one had just lifted the Norman Brookes trophy for a record seventh time, after completing a Wimbledon, Flushing Meadows and Melbourne Park hat-trick that would have seemed scarcely possible this time last year.

His 6-3, 6-2, 6-3 rout of Rafael Nadal saw him stretch his lead at the top of the world rankings, just a few months after he plummeted outside the top 20 for the first time in 12 years.

"I'm just trying to contemplate on the journey in the last 12 months," said an emotional Djokovic, pausing for breath to compose himself and not become tearful.

"To be standing now here in front of you today and managing to win this title and three out of four Slams, this is amazing. I am speechless."

After missing the 2017 US Open with a bothersome elbow and losing in the last 16 at the Australian Open in January 2018, Djokovic underwent surgery to fix the nagging problem.

His return was not smooth, his form tanked and when he lost in the quarter-finals at Roland Garros in 2018 he slumped to 22nd in the rankings and even briefly threatened to pull out of Wimbledon.

Now Djokovic heads to the next major, at Roland Garros, aiming to hold all four Grand Slam titles concurrently for a second time in his career -- he first achieved it when winning the French Open in 2016 -- despite only managing to be competitive for the second half of 2018.

He opted to play on the grass after all and romped to a fourth Wimbledon crown, a 32nd Masters title in Cincinnati and then a third triumph at the US Open in September.

Despite a 22-match winning streak ending with defeat to young tyro Karen Khachanov in Paris, followed by a loss to another NextGen force, Alexander Zverev, at the ATP Finals in London, he finished the year on top of the world.

"Reflecting on what I've been through in the last year, it's quite a phenomenal achievement," said Djokovic after knocking Nadal from the top spot in November.

"I'm very, very happy and proud about it. Five months ago, it was highly improbable considering my ranking and the way I played and felt on the court."

Djokovic is now just two behind Nadal's total of 17 Grand Slams and five shy of Roger Federer's record of 20.

Djokovic's ability to thrive among the greats has never been in doubt, but the size of his heart often led to questions in his early days.

At Wimbledon in 2007, he retired with a back injury in the third set of his semi-final against Nadal.

He also quit at the 2006 and 2007 French Opens at the third round and quarter-final stages respectively, while at the 2009 Australian Open, where he was defending champion, he pulled out of his quarter-final with Andy Roddick citing heat exhaustion.

But nobody could question his courage at the 2012 Australian Open, when he beat Nadal in the longest Grand Slam final of all time, a draining 5hr 53min epic.

Djokovic captured the first of his majors in Melbourne in 2008, beating Jo-Wilfried Tsonga, but it was three years before he added his second.

Two more Australian Opens followed in 2012 and 2013, although three heartbreaking final defeats kept the French Open frustratingly out of reach until 2016, when his breakthrough win at Roland Garros allowed him to complete a career and first calendar Slam.

They have two children, a son Stefan and daughter Tara.

This story has been published from a wire agency feed without modifications to the text. Only the headline has been changed.
Posted by Sulochana at 4:29 PM