It’s no secret that Prime Minister Narendra Modi plans on connecting 6,00,000 villages across the country with high speed internet. He believes that if his “Digital India” dream is fulfilled, the Indian economy could expand from $2 trillion to $20 trillion. That sounds like an ambitious plan, even for the world’s largest democracy.

But, when Modi spoke at Facebook’s townhall discussion at Menlo Park last September, it looked like he meant business. He elucidated his plans to connect local governments with high speed internet and also spoke about how imperative social media is in shaping public policy.

In February last year, Facebook launched internet.org in partnership with Reliance Communications. This project was meant to connect Indians by offering truncated versions of a select few partner sites. It received a lot of flak from the supporters of net neutrality, who were concerned that Facebook could essentially control the content Indians would consume. Critics of the initiative were against the idea of a “walled garden” access to the internet.

This led the company to relaunch the project as Free Basics, where all developers and websites could come on board as long as they met the requisite technical criteria laid down by Facebook. Yet again, detractors dismissed the project as a rebranding of internet.org. 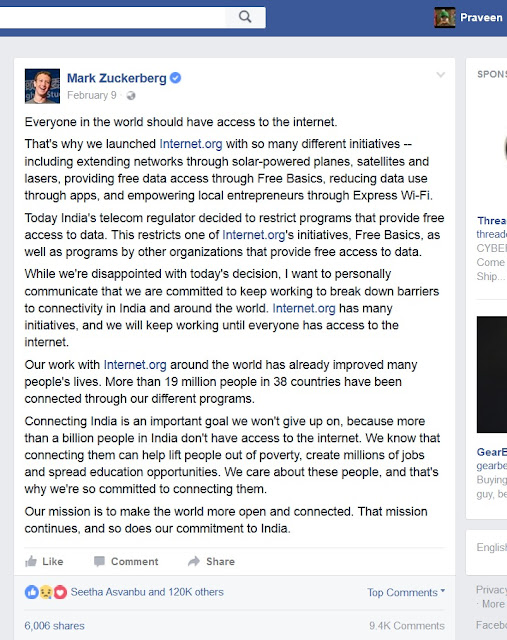 In a blog post in February this year, Mark Zuckerberg expressed his disappointment with the regulator’s decision and added, “Connecting India is an important goal we won't give up on, because more than a billion people in India don't have access to the internet. We know that connecting them can help lift people out of poverty, create millions of jobs and spread education opportunities. We care about these people, and that's why we're so committed to connecting them.”

So, that begs the question, is Zuckerberg now pulling out yet another rabbit out of the hat with Express WiFi? Or is his latest effort just at an attempt at repackaging Free Basics?

What Is Express WiFi?

According to Facebook's internet.org, "Express Wifi" is live in India and it is "working with carriers, internet service providers and local entrepreneurs to help expand connectivity to underserved locations around the world".

Facebook refused to comment on BloombergQuint’s query on how different this project is from Free Basics. Instead, a Facebook spokesperson said on email, “Currently, we are working with ISP and operator partners to test Express Wi-Fi with public Wi-Fi deployments in multiple pilot sites. This solution empowers ISPs, operators, and local entrepreneur retailers to offer quality internet access to their village, town or region.”

It’s unclear though, whether the company would offer full internet access or access to only a select few sites.

One thing is certain that unlike Google’s free WiFi offering, Express WiFi is going to be a paid service. Again, while the company shied away from sharing any details or elaborating on pricing plans, its spokesperson said, “Express WiFi customers can purchase fast, reliable and affordable data packs via digital vouchers to access the Internet on the Express WiFi network.”

The company believes a sustainable economic model is one which can scale to bring all of India online, he added.

So, it seems like Express WiFi is a whole different creature considering that it’s a paid service and Facebook will only provide its technology for last mile connectivity. For high speed internet, the company will work with local internet service providers.

Facebook isn’t the only global tech behemoth that India seems to have wooed. Google has also tied up with the Indian government to bring high speed WiFi to 400 railway across India.
The tech giant has been working with the Indian Railways and RailTel to bring high-speed WiFi to 100 of the busiest stations in India before the end of this year. It will eventually expand this scheme to cover an additional 300 stations. According to Sundar Pichai of Google, the public WiFi project will be the largest in the country and based on the number of potential users, it will be amongst the largest in the world.

That’s not all. Earlier this year, Google announced a new platform, Google Station, which will take public WiFi to places like schools, malls, and restaurants to improve connectivity.

It’s clear that tech behemoths like Google, Facebook, Microsoft and Uber are leaving no stone unturned in a bid to crack the Indian market. And while a lot of their efforts seem interesting, in a time when consumers have become increasingly aware and tech-savvy, effectively communicating plans to consumers has become imperative. Many Indians are wary, especially after the debacles that were internet.org and Free Basics. The company has tried repackaging old wine in a new bottle before and there didn’t seem to be any buyers.

Apar Gupta, a top technology lawyer in New Delhi said, “At this stage I would encourage Facebook to share further data and specifications that would build trust given the large scale opposition that existed against Free Basics. I support the role of private persons to extend and increase access to the Internet without economic or technical discrimination while safeguarding user privacy."

Express WiFi is currently under trial stage in India, but to ensure the success of the project, one thing is clear – transparency will be key.
Posted by Praveen Dilip Geoffrey at 1:14 PM