Jayalalithaa passed away, Apollo Hospitals states she died at 11:30 pm


Jayalalithaa on Sunday suffered a cardiac arrest, her condition is said to be very critical at the moment. In picture: Tamil Nadu Chief Minister J Jayalalithaa.
Tamil Nadu Chief Minister Jayalalithaa passed away at 11:30 p.m. on Monday, according to an official statement from the Apollo Hospitals. She had suffered a cardiac arrest on Sunday evening. The CM had been undergoing treatment at the Chennai hospital since September 22.
Following her cardiac arrest, the hospital had said in a statement: "She is being treated and monitored by a team of experts including cardiologists, pulmonologists and critical care specialists."
The hospital, in a series of tweets, had also said: "She is on extracorporeal membrane heart assist device and is being treated by a team of expert doctors and critical care specialists. Dr Richard Beale from London has also been consulted and he has concurred with the line of treatment by our cardiologists & pulmonologists."
Tamil Nadu ministers and Governor C Vidyasagar Rao were alerted in the evening itself after Jayalalithaa's health deteriorated.
"Five ministers, including Finance Minister O Panneerselvam, were already in Chennai. All other ministers who had gone to the districts over the weekend also started returning to Chennai. Governor Rao, who was attending the Navy Day function in Mumbai, boarded a flight to Chennai," an officer was quoted by the Indian Express (IE) as saying.
The Chennai Police also tightened security in and around Greams Road where the hospital is located. There were around 1,000 security personnel deployed outside the hospital at midnight. Police also resorted to lathi charge to control the crowd that had begun gathering outside Apollo. CRPF teams have also been put on high alert. 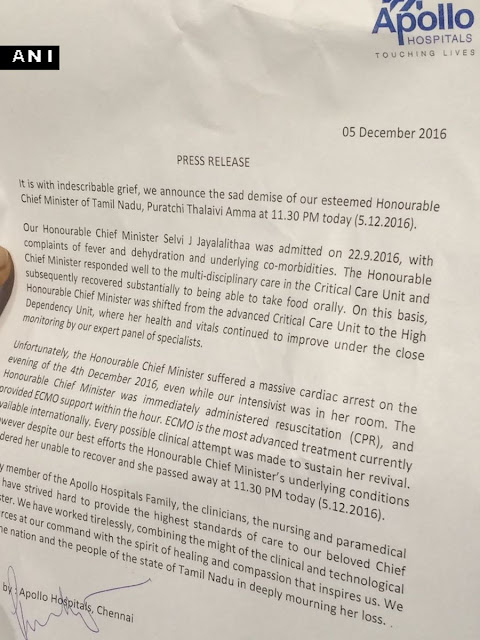 12:10 a.m. IST: Chief minister's advisor Sheela Balakrishnan has also left Apollo Hospital and headed for Poes Garden.
Meanwhile, O Panneerselvam has told AIADMK MLAs in the meeting that there is only one leader for them, and that is Jayalalithaa.
12:05 a.m. IST, December 6, 2016: Apollo Hospitals Chairman Dr Prathap C Reddy and Tamil Nadu chief secretary have left the hospital.
11:55 p.m. IST: A convoy of vehicles -- part of the chief minister's convoy -- has entered the Apollo Hospitals, whose gates have been shut. The convoy has been kept on the ready.
11:50 p.m. IST: Union minister Venkaiah Naidu is expected to meet governor C Vidyasagar Rao soon.
11:40 p.m. IST: Local reports are claiming that roads from the Apollo Hospitals to Poes Garden, the official residence of Jayalalithaa, have been cleared and lined with policemen. Cops have also been deployed near Jawaharlal Nehru Stadium, where some activity has been witnessed.
Posted by Praveen Dilip Geoffrey at 12:35 AM