After More Than 100 Years, California's Iconic Tunnel Tree Is No More 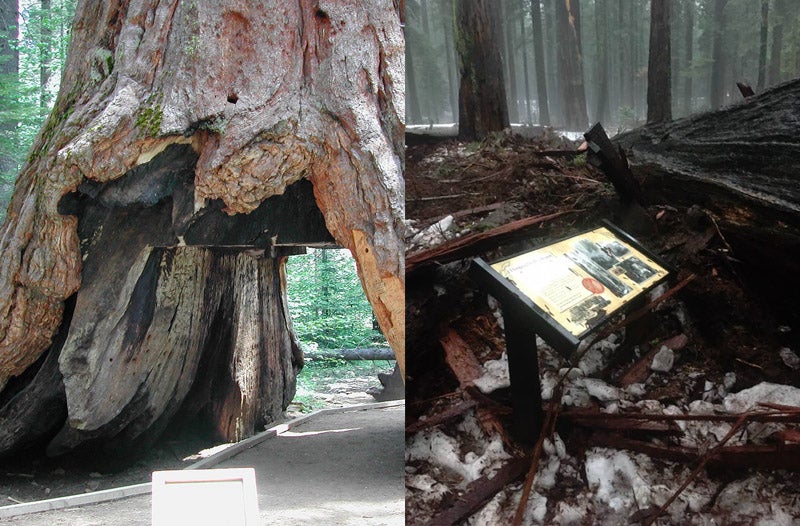 The Pioneer Cabin Tree, a giant sequoia in Calaveras Big Trees State Park that was tunneled through in the 1880s, has fallen due to severe winter weather. It was believed to be hundreds of years old.

Since it was first hollowed out in imitation of Yosemite’s Wawona Tunnel Tree, thousands of tourists and vehicles have passed through the sequoia. The Wawona tree was killed by the process and later fell during a storm in the 1960s, but the Pioneer Cabin Tree clung on, showing signs of life well into the 21st century.

“The pioneer cabin tree was chosen because of its extremely wide base and large fire scar,” wrote park interpretive specialist Wendy Harrison in 1990. “A few branches bearing green foliage tell us that this tree is still managing to survive.”

On Facebook, where the tree’s death was first announced, park visitors shared generations of memories involving the giant sequoia. The Calaveras Big Trees Association, however, offered a simple message about the tree’s return to the earth it sprouted from so many years ago.

“This iconic and still living tree—the tunnel tree—enchanted many visitors,” wrote the association. “The storm was just too much for it.”
Posted by Praveen Dilip Geoffrey at 8:15 PM