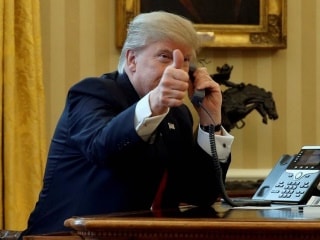 The budding partnership between the US and India could be set back by a nuts-and-bolts dispute over employment visas.

As President Donald Trump looks to help American workers, his administration is considering a broad review of the H-1B visa program used heavily by India's massive technology and outsourcing industries to send programmers and other computer specialists to the United States.

The technology sector is vital for India's economy and creating jobs for a fast-growing, young workforce - a top priority for Prime Minister Narendra Modi. America is the main customer: It accounted for more than 60 percent of India's $108 billion in foreign tech and outsourcing sales last year, according to the National Association of Software and Service Companies (NASSCOM), an industry lobby group.

"There is a general sense of anxiety in the industry," said Dipen Shah, an IT analyst at Kotak Securities in India. He said it seemed likely that the cost of hiring people on H-1B visas would increase, hurting tech companies' bottom lines.

A draft executive order prepared by Trump's team is short on specifics. It calls for a report within nine months on the injury caused to U.S. workers by several working visa categories, including H-1B, and a re-consideration of how to allocate the visas to ensure they go to "the best and the brightest."

The U.S. government grants up to 85,000 of these visas each year. They're open to a broad range of occupations and recipients who can stay in the country for up to six years. First Lady Melania Trump, who comes from Slovenia, had one as a fashion model in the 1990s.

The top occupations, however, are tech-related and about 70 percent of the recipients are Indian.

India's government wants more of the visas to be issued, not less. After visa fees were hiked in late 2015, India challenged the U.S. at the World Trade Organization - a rare instance in which one WTO member contended that another's immigration laws violated international trade rules.

Foreign Ministry spokesman Vikas Swarup said last week that it had raised the visa issue with Trump's administration and Congress at "senior levels." The heads of India's biggest IT companies plan to visit Washington this month to make their case to U.S. officials and lawmakers.

N.R. Narayana Murthy, co-founder of the Indian tech giant Infosys, cautioned that the Indian software industry's role in building and maintaining the information infrastructure of major U.S. corporations is critical to their success. "Tampering with it is not going to be easy," he said.

He said Indian tech businesses will have to adapt by depending less on visas for Indian workers and hiring more Americans.

Critics say the program is abused, with many companies contracting out jobs to consulting firms that bring in lower-paid workers from overseas. Employees on H-1B visas are unable to change employers. Critics say that leaves them with little leverage to negotiate their salaries. Trump's nominee for attorney general, Sen. Jeff Sessions, has long opposed the program, and there's bipartisan congressional support for reform.

Advocates say the visa program allows companies to fill skills shortages and encourages students with hi-tech degrees to stay in the U.S. and set up companies of their own.

Vinson Palathingal, who runs a mid-sized, U.S.-based IT consulting company, said the administration's priority should be training American workers to address skills shortages, and developing a quicker path to permanent residency for Indian talent. Without those steps, he said, restricting H-1B visas would mean tech jobs leaving the U.S.

"Limitations on this visa are sure to cause of a lot concern in Delhi and that will be conveyed in fairly strong terms to Washington," said Rick Rossow, an India specialist at the Center for Strategic and International Studies.

"The question is how much is the Indian government willing to put on the table to represent corporate interests in its discussions with the U.S.," said Bharath Gopalaswamy, director of the South Asia program at the Atlantic Council, another Washington-based think tank. "I don't think they will bet all their chips on this."
Posted by Praveen Dilip Geoffrey at 8:47 PM