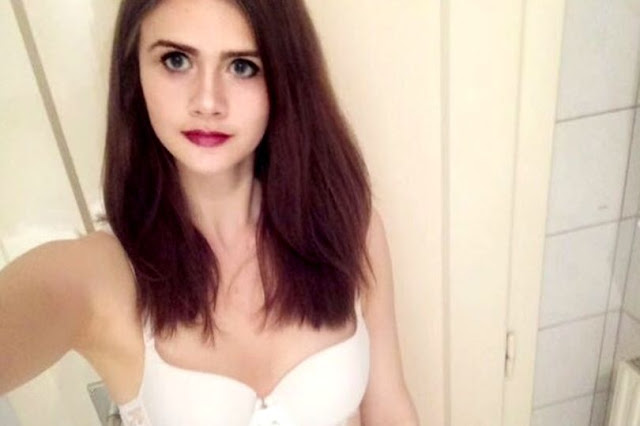 A teenager is putting her virginity up for auction on a website where doctors will verify to potential buyers that the girls have not had sex.

The 18-year-old, named only as Kim, is hoping to sell her virginity so that is able to pay for university, as well as buy a flat and a car.

According to German local media she contacted a specialist escort agency selling virgins for millions with the words: "Hello, my name is Kim and I would like to sell my virginity."

The young woman , who is half Austrian and half German, wants to study somewhere in Germany or in the Austrian capital of Vienna.

Potential buyers can also carry out their own 'inspections' on Kim

She decided to sell her virginity to finance her studies, a flat and a car.

According to the Cinderella Escorts website, her virginity is proven with a doctor's certificate and a potential buyer can also do their own tests to "inspect" the girl.

On their website, Kim states she likes drinking orange juice and loves Greek food and roses.

Kim said: "I would like to study in Germany or Vienna. With the money I can buy a flat, pay my tuition fees and afford a car."

A doctor will verify Kim's virginity to potential buyers

Kim wants to finance university with the money, as well as buy a flat and a car

The student was inspired by Aleexandra Khefren, a 18-year-old Romanian model who sold her virginity for €2.3million (£2million) to an unnamed businessman from Hong Kong.

News about Khefren and the virgin escort agency went viral across the world and also came to the attention of Kim.

She said: "So is it really worth more than €2.3million to give my virginity to a man who might eventually leave me anyway? To be honest, I do not believe it."

Kim says she is willing to meet with the highest bidder anywhere in the world as long as all travels are paid for.

Kim says she will meet the highest bidder anywhere in the world, as long as they cover her travel costs

They reported that the man behind Germany's most famous escort website is a 26-year-old obese German from Dortmund who still lives in his mother's basement.

Jan Zakobielski outed himself as the man behind the multi-million pound operation which he runs from his parent's house, both of them unaware of his business.

Zakobielski said: "No one makes these young women do anything they don't want to do. They have their own minds and their own opinions on sexuality."
Posted by Praveen Dilip Geoffrey at 10:29 PM