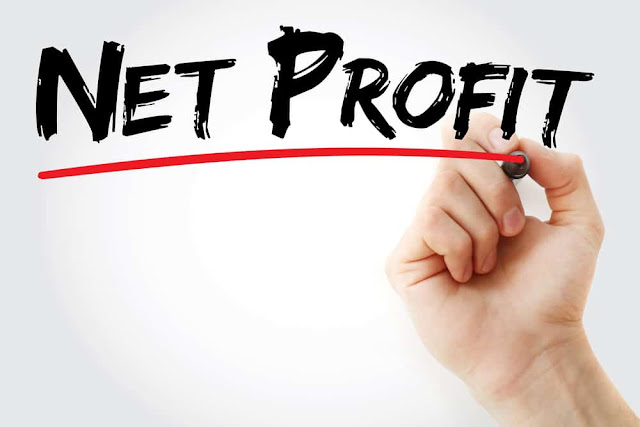 What Is Net Profit Margin?

Net income is also called the bottom line for a company or the net profit. Net profit margin is also called net margin. The term net profits is equivalent to net income on the income statement, and one can use the terms interchangeably.

What Does Net Profit Margin Tell You?

The net profit margin factors in all business activities including:
Net profit margin is one of the most important indicators of a company's financial health. By tracking increases and decreases in its net profit margin, a company can assess whether current practices are working and forecast profits based on revenues. Because companies express net profit margin as a percentage rather than a dollar amount, it is possible to compare the profitability of two or more businesses regardless of size.

Investors can assess if a company's management is generating enough profit from its sales and whether operating costs and overhead costs are being contained. For example, a company can have growing revenue, but if its operating costs are increasing at a faster rate than revenue, its net profit margin will shrink. Ideally, investors want to see a track record of expanding margins meaning that net profit margin is rising over time.

Most publicly traded companies report their net profit margins both quarterly during earnings releases and in their annual reports. Companies that can expand their net margins over time are generally rewarded with share price growth, as share price growth is typically highly correlated earnings growth.

Gross profit margin is the proportion of money left over from revenues after accounting for the cost of goods sold (COGS). COGS are raw materials and expenses associated directly with the creation of the company's primary product, not including overhead costs such as rent, utilities, freight, or payroll.

Gross profit margin is the gross profit divided by total revenue and is the percentage of income retained as profit after accounting for the cost of goods. Gross margin is helpful in determining how much profit is generated from the production of a company's goods because it excludes other items such as overhead from the corporate office, taxes, and interest on a debt.

Net profit margin is the percentage of profit generated from revenue after accounting for all expenses, costs, and cash flow items.

Net profit margin can be influenced by one-off items like the sale of an asset, which would temporarily boost profits. Net profit margin doesn't hone in on sales or revenue growth, nor does it provide insight as to whether management is managing its production costs.

Imagine a company that has the following numbers reported on its income statement:

Here, we can gather all of the information we need to plug into the net profit margin equation. We take our total revenue of $6,400 and deduct variable costs of $1,700 as well as fixed costs of $350 to arrive at a net income of $4,350 for the period. If Jazz Music Shop also had to pay interest and taxes, that too would have been deducted from revenues.

Below is a portion of the income statement for Apple Inc. (AAPL) as reported for the quarter ending on December 29, 2018:

Posted by Sulochana at 5:29 PM