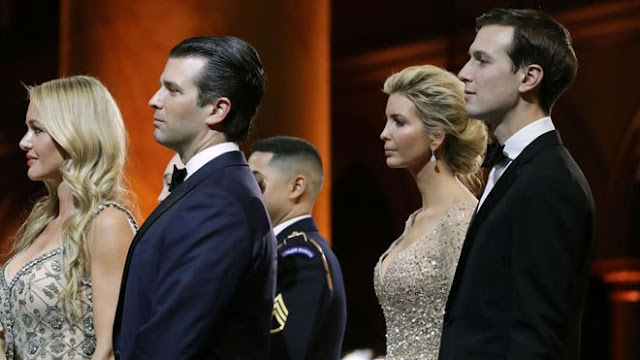 The word "explosive" doesn't do justice to the details of the emails Donald Trump Jr tweeted out on Tuesday morning.
Calamitous, perhaps? Seismic? Twitterdammerung?
The president's eldest son probably revealed this correspondence because the New York Times was about to publish it, a fourth devastating journalistic wave that was poised to crash on the White House at any moment.
If that's the case Trump Jr's act, while committed in the name of being "totally transparent", was akin to shooting oneself in the head to avoid getting shot. He certainly didn't do it to save his own skin.
Here are four of the most remarkable passages of the email chain that will live in infamy - and what it all means.

Trump Jr originally tweeted out the first three pages, leaving out page four, which has all the juiciest bits. It was like Beethoven's Ninth Symphony without Ode to Joy or the 1812 Overture without the cannons.
The above line is clearly the highlight of the page. Rob Goldstone, the music publicist turned international man of mystery, is straight-up telling the presidential son that Russia wants to help his dad.
In the prior paragraph, he details exactly what he says is being offered - "official documents and information" about Democrat Hillary Clinton. Several lines later he floats the possibility of sending the incriminating material to Donald Trump the Elder, via his personal assistant, Rhona. (Rhona should probably get her own lawyer, by the way.)

Setting aside the glaring lack of punctuation, this line in Trump Jr's response to Goldstone's email shows he knows exactly what he's getting himself into.
He's practically drooling at the possibility of being handed documents from the Russian government that incriminate the one person standing between his father and the White House.
What's more, those last few words seem to indicate that Trump Jr also is thinking about when such information could be revealed.
The meeting took place in early June. "Later in the summer", the general election campaign was in full swing.
It's when both parties held their national conventions. It is also, incidentally, when the most damaging emails hacked from the Democratic National Committee server - at the behest of the Russian government, according to the US intelligence community - went public via Wikileaks.

"Emin asked that I schedule a meeting with you and The Russian government attorney who is flying over from Moscow for this Thursday."

The lawyer in question - Natalia Veselnitskaya - has asserted that she is not connected to the Russian government, but Goldstone is presenting her to Trump Jr here as a "government attorney".
There's always the possibility that Goldstone is blowing smoke Trump Jr's way, trying to make it seem like he's setting up a super-secret meeting that will upend the presidential campaign when actually he's just saying whatever he thinks is necessary to get a meeting that his client, Russian pop star Emin Agalarov, has requested.
In the music business, I suppose, anything goes.
That may not exonerate Trump Jr, but it would relieve the Russian government of culpability, at least in this regard.

At the very top of the email chain are two names that should be of particular concern to the White House - Mr Trump's son-in-law Jared Kushner and then-campaign chairman Paul Manafort.
Trump Jr had told the New York Times that he had asked the two men to attend the Trump Tower meeting but had not told them what was to be discussed.
This seems to undercut that, because both men probably had the full email chain, including the earlier correspondence discussing the promise of incriminating "documents and information" sitting in their in-boxes the day before they attended the meeting.
Posted by Praveen Dilip Geoffrey at 9:53 AM